The HTC One M9 played second fiddle to all its rivals last year. Its camera was dreadful, its battery life was severely sub-par and its nigh-on identical design to its predecessor, the One M8, meant it was left standing in the M8’s shadow rather than stealing its own piece of the limelight. In fact, it was only when HTC released its second-tier One A9 last autumn that it felt like this once great smartphone giant was getting back on track.

HTC’s clearly taken this to heart for its new HTC 10, as it shares a striking resemblance to its A-series sibling. Both share the same slim antenna lines, which run across the top and bottom of a full metal unibody, and they each have an almost identical fingerprint sensor incorporated into the home button on the front. However, it doesn’t take much to see where the HTC 10 breaks away from the A9’s school of design, as those huge, chamfered edges look absolutely stunning against the A9’s flat, uniform finish, and the way they catch the light immediately draws the eye. 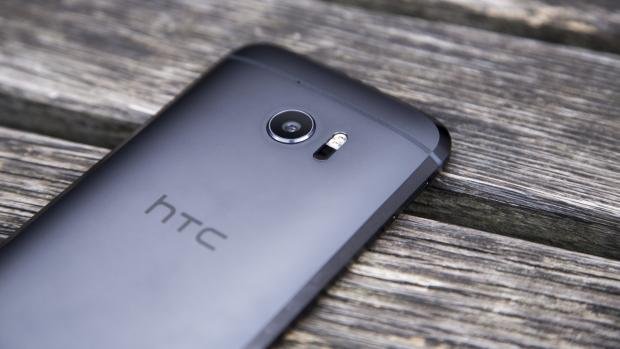 The Glacier Silver model shows it best, revealing at least three different shades of silver when placed face down on a table, but the Topaz Gold and Carbon Grey are both equally handsome in their own way. Regardless of which one you pick, it’s definitely more attractive than LG’s rather plain-looking G5, and its all-metal exterior looks a damn-sight smarter than the fingerprint-marred glass rears of Samsung’s Galaxy S7 and S7 Edge handsets. This is what a flagship smartphone should look like – premium, stylish and not looking like it’s been through a hedge backwards.

It’s slim, too, measuring just 3mm at its thinnest point. Admittedly, this stretches to a rather chunky 9mm at its centre, but its simultaneously rounded and angular back feels great in the hand. It provides just the right amount of grip without feeling too sharp, and its skightly heftier weight of 161g makes it feel secure to hold and sturdily built. 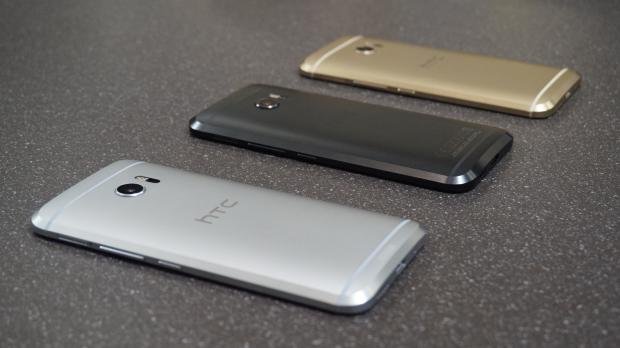 The HTC 10 isn’t just a better-looking phone than the One A9, though, as it also addresses some of that handset’s major shortcomings. For instance, despite having a fingerprint sensor that doubled up as a home button, the One A9 still had onscreen buttons for the Back and Recents keys. The HTC 10, however, finally makes a return to capacitative buttons, freeing up more space on the screen for your apps and video files while also making a lot more sense than the One A9’s mixed setup.

That said, I still don’t find front-facing fingerprints sensors hugely practical, as they can be a bit of a pain to reach when using the phone one-handed. Indeed, the HTC 10 often didn’t recognise my thumb when I placed it on the sensor horizontally, instead demanding that I have the full, central portion of my thumb firmly on the main contact point.

It worked better when placing my thumb on it vertically, but it’s still nowhere near as convenient as other rear-facing sensors I’ve used, such as the one on the LG G5. That said, having one on the front still has its uses. It’s much easier to use when the phone’s lying flat on a table, for example, and once Android Pay eventually launches in the UK, rear-facing sensors may become quite awkward to authorise payments with when you’re also tapping your phone on an NFC reader.

Admittedly, the HTC 10 is probably the only flagship Android smartphone this year that hasn’t been designed with hundreds of peripherals in mind. The LG G5, for instance, has several different modules you can attach to the bottom of the phone, such as the Cam Plus (which adds a wedge-like camera grip and physical buttons to the back of the phone) and Hi-Fi Plus (which adds Hi-res audio playback as well as a dedicated DAC for your music), as well as dedicated ‘Friends’ devices including the 360 Cam and 360 VR headset.

The Galaxy S7 and S7 Edge don’t have quite as many options as the G5, but even these phones are compatible with Samsung’s Gear VR headset and its upcoming Gear 360 cam. With no such devices currently in the pipeline for the HTC 10, this leaves it feeling decidedly less flexible than its rivals.

However, it’s worth noting that HTC already has a VR headset – the rather excellent HTC Vive – so it seems unlikely that it will make and release another one for mobiles in the near future. The HTC 10 also already comes with Hi-res audio support, negating the need for a separate £150 module like the G5. I’m not that convinced about LG’s Cam Plus grip either, so the only thing the HTC 10’s really lacking is a proper 360-degree camera accessory.

That said, it’s always possible HTC might release a 360-degree successor to its periscope-like Re camera at some point in the future, but even if it doesn’t release another version of the Re, LG’s 360 Cam device works across all Android devices, so HTC 10 buyers won’t be left wanting when it comes to 360-degree video footage.

One thing the HTC 10 isn’t short on is raw processing power, as it’s got one of Qualcomm’s brand-new quad-core 2.3GHz Snapdragon 820 chips inside it. It’s also got 4GB of RAM, putting it neck-and-neck with the LG G5. However, it couldn’t quite match the G5 when it came to running our Geekbench 3 benchmarks, as the HTC 10 only scored 2,022 in the single core test and 5,091 in the multicore test, putting it 300 points behind the G5 in each one. This makes it the slowest smartphone out of the big three, as Samsung’s Galaxy S7 was even further in front for the multicore test, finishing with a huge score of 6,437.

Not that you’d probably notice the difference in everyday use, however, as the HTC 10 still felt incredibly quick and nippy when browsing the web, scoring an impressive 1,503 in Peacekeeper, and swiping through its Android homescreens was slick and responsive.